There are strict rules about what can and cannot be claimed by manufacturers of devices which have an antimicrobial surface. In the following article Dr Andrew Summerfield, the new regulatory affairs manager at UK headquartered BioCote—an antimicrobials company with products and services comprising additives, masterbatches and associated regulatory, technical and marketing support— guides us through new legislation in the European Union and current laws in the USA.

Legislation in the EU
In the EU, antimicrobial substances most relevant to medical plastic processors—such as those used in the manufacture of antimicrobial surfaces or disinfectants—come under legislation for biocides.

Pharmaceutical substances designed to be used on or inside patients—like antibiotics and other drugs, which can also be referred to as antimicrobials—are treated separately. In September 2013 a single set of EU-wide rules covering biocides will come into force in all member states—the Biocidal Product Regulation (BPR) EU 528/2012. The BPR will replace the Biocidal Product Directive (BPD) 98/8/EC, originally introduced in February 1998. The replacement of the directive with a regulation is a continuation of a common trend in the EU. It is similar to the course being set for medical devices in the proposed Medical Device Regulation, designed to replace the current Medical Device Directive (for a guide to this directive see Medical Plastics News November- December 2012, pages 6-7).

Come September 2013, the BPR will bring the legal control of these substances under the EU. Many elements will stay the same in the switch from the BPD to the BPR. For example, the two stage process of i) registration of an active substance at EU level and ii) authorisation of biocidal products at member state level will remain—as well as many other themes and practices.

There are some administrative tweaks under the BPR. Categories of biocidal product will be authorised centrally by the European Chemical Agency (ECHA) while several other measures have been made for streamlining trade, data requirements and the like. But perhaps the biggest change for the antimicrobial polymer and powder coatings industry is that treated articles will be brought into the scope of regulation.

Under the new rules, treated articles will need a label detailing the nature of the biocidal treatment. It is not yet clear what exactly defines a treated article in Europe. But the previously accepted rule of thumb was if the product would be on the market without a biocide in it, then it is a treated article. Public health claims for treated articles are also being discussed and industry awaits the findings of the European Commission as to exactly what the requirements (and possibly restrictions) will be.

The United States
Under US regulations, antimicrobial substances are treated as non-agricultural pesticides and require registration with the Environmental Protection Agency (EPA). Data is submitted for a pesticide product in terms of efficacy, environmental fate and safety. Once a registration is completed, you are provided with a label from the EPA which specifies which claims can be made.

Relatively recently, pesticide-treated products made something of an explosion on to the consumer market in the USA, with what the EPA considered inappropriate claims regarding public health benefits to consumers. Public health?: The EPA states that if you want to control a public health organism like bacteria, you need to register your pesticide or pesticide device and provide data that the pesticide works effectively and safely.

But there are tough regulations on what manufacturers of finished devices can and cannot claim with respect to protection from microorganisms. Taking the example of a cup treated with a biocide. The cup itself is protected from “microorganisms”, but it cannot be legally claimed that the user of the cup is protected. If we want to market our cup as cleaner, safer and more hygienic—that it protects the consumer—we must register the actual cup with the EPA as a pesticide device. Any registration applies only for this cup, so any other products must go through the same registration process. In many cases is not practical or economically viable to register individual devices.

Treated articles?
In the United States in order not to prevent trade of these pesticide-treated products, something of a half-way house was developed—the Treated Article Exemption. This allows non-public-health claims to be made about the product, allowing labelling and associated marketing of the product to detail the preservative nature of the antimicrobial properties. The pesticide must still be registered with the EPA for its use as a preservative, however if guidance about the language used in a marketing claim is followed, the treated article itself remains outside of true regulation. It is, therefore, important for distributors of treated products into the United States to understand the restrictions placed on language used for claims on the labels of these products.

Medical Device Regulations: Could Antimicrobial Functionality be Treated as Drug Delivery?
Adding a biocide to a medical device might seem like an obvious step to improve the surface hygiene of the device. In addition to the standard regulations mentioned above, the antimicrobial additive must be compliant with medical device regulations in the target market. In order for the antimicrobial biocide to have an effect on the target microorganisms, it will be present in clinically significant quantities and be bio-available. If this biocide can act on the patient—for example by killing bacteria on the surface of the skin—it may be considered to be a drug or to have a drug-like effect. Essentially, the surface—if within the body or in contact with the skin—may become a drug delivery system and if so, may change the class of the device due to increased risk or uncertainty.

In Europe, medical device legislation is under revision, and whilst in the current draft of the new regulation there is no specific measures for biocides, biocides are mentioned. The document states that groups may be set up to aid the commission and member states in regulatory coherence and expertise for medical device related sectors such as “medical devices, intra venous devices (IVDs), medicinal products, human tissues and cells, cosmetics and biocides”. In the US, the 510k notification on antimicrobials published in 2007 remains in draft form. But revision is expected to continue as additional guidance documents are published in 2013.

Conclusion
Clearly the regulatory situation for biocides is in a state of change, and although opportunities for implementing this technology are on the rise, care must be taken when making this technology available on the market. Obviously, the more critical the applications, the more stringent the legislative framework will be.

This article was written by Dr Andrew Summerfield, Regulatory Affairs Officer at BioCote and originally published in Issue 10 (Jan-Feb 2013) of ‘Medical Plastics News’. 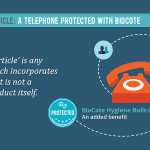